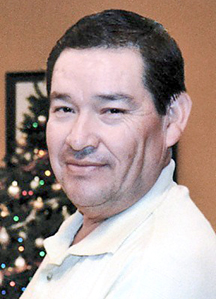 Mr. Jesus Cedillo of Jefferson Avenue East in Carthage was found deceased sitting in his pickup truck at the Quik-n-Easy on Dixon Springs Highway on Monday afternoon July 16, 2018. He was pronounced dead at 4:14 p.m. at the Riverview Regional Medical Center E.R. Mr. Cedillo was 54 and had battled diabetes for the last few years.

Funeral services were conducted by his pastor, Apostal Jose Rodriguez on Saturday morning July 21st at 11 a.m. from the Carthage Chapel of Sanderson Funeral Home. Mr. Cedillo’s three daughters will witness his cremation at Cumberland Family Services in Algood and there will be a private family burial beside his wife in section two of the Ridgewood Cemetery in Carthage following cremation.

He was born Jesus Cedillo Cedillo in Ocuilan Estado de Mexico on June 5, 1964 and was the seventh of thirteen children and was the son of Mrs. Jacinta Cedillo of Ocuilan, Mexico and the late Salome Cedillo.

An infant sibling died at birth.

Mr. Cedillo was united in marriage in Santa Cruz Tezontepec, Mexico on March 14, 1985 to Ovilan, Mexico native, the former Sonia Camacho Lopez. She preceded him in death on September 14, 2017 at the age of 51 following only thirty two years of marriage and following a three year battle with cancer.

Mr. Cedillo relocated his wife and three daughters from Mexico to Tennessee in 2002 and he began employment with the cemetery division of Sanderson Funeral Home and Smith County Monument Co. on March 28, 2005 and quickly became a trusted and dependable employee.

He was a member with his family at the Casa de Dios (House of God) on Dickerson Road in Nashville where the family attended faithfully.