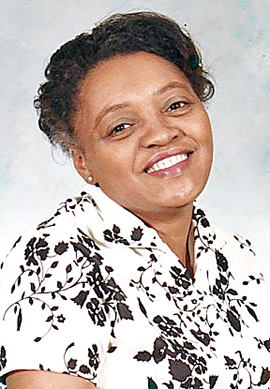 Hospital where she was admitted July 26th.

There are few things we have control of in life, two of those we do not choose when we are born and when the Lord calls us home to be with him at his right side. The one thing we can choose is what we accomplish in our lives and Mattie Lucy Smith’s impact will be felt for years to come in the hearts of all who knew and loved her.

Funeral services were conducted from the Carthage Chapel of Sanderson Funeral Home on Tuesday afternoon August 7th at 1 p.m. with her pastor Rev. Tyrone Coleman doing the preliminaries for the service and Sis. Demetria Carver Bowers and Rev. Larry Bowers officiating. Burial was beside her husband in the Garden of the Cross at Smith County Memorial Gardens.

One of eight children born to the late Rev. Ben Driver King and Agnes Christine Brown King who died at the age of 80 on December 29, 2002, she was born Mattie Lucy King in the Elmwood Community on September 18, 1937.

She was preceded in death by four brothers, one of which died at birth, one who died at age 14 and Phillip King and Sammy King who perished in a house fire at the family home just off Pea Ridge Road on August 8, 1987. He was just 40 years old. Also a brother-in-law, John Roy Carter and a nephew Robert “Nagy” King who died accidently while in Germany with the United States armed forces on November 3, 1993 at the age of 27.

At the home of then Smith County Judge Clint Beasley on North Main Street in Carthage, she was united in marriage to Eli Jordan Smith Sr. on January 28, 1961. He preceded her in death on December 29, 2002 at the age of 70 following almost forty two years of marriage.

While employed at the Sheriff’s office under former Sheriff Johnny Bane, Mrs. Mattie Lucy served not only as a cook but as a dispatcher. As the jail cook she served the same delicious meals to inmates and guests as she served to her own family. People in the community would come to the jail to eat lunch. She also seemed to know everyone’s business, but she never spoke a word of it. Her comment was “mum is the word”.

She also was employed as a nurse tech at the former Smith County Health Care Center.

Unparalleled to the love of her family was the love of her Lord and her church. She was saved and baptized into the full fellowship of the Mt. Pilgrim Baptist Church in the Elmwood Community where her father served as the Pastor. As an adult she continued her devotion to Mt. Pilgrim, while embracing her church family at Mt. Olive Missionary Baptist Church in Carthage. It was at Mt. Olive that she blossomed.

One of her greatest pleasurers was serving on the usher board. Later, she was named a Mother of the church and took immense pride in sitting on the second row with her devoted aunt, Fannie Lucille Garrett, Mary Catherine High and the late Margaret Hogan.

Mrs. Smith was a 1955 graduate of Wilson County High School in Lebanon before Smith County constructed the Turner High School and before integration of schools in 1966.

Also surviving are two nieces, four nephews and a host of other relatives, friends and acquaintances.