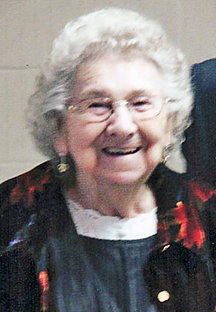 Mrs. Violet Woodard, a longtime resident of the Monoville Community, died at the age of 97 at 7:17 a.m. Wednesday morning August 8, 2018 at the Concordia Health and Rehabilitation Center in Carthage where she had made her home since September 25, 2015. She was under the care of Kindred Hospice.

Bro. David Thaxton officiated at the 1 p.m. Saturday afternoon August 11th funeral services from the Carthage Chapel of Sanderson Funeral Home and her son-in-law Bro. Junior Hunt delivered the eulogy. Interment followed beside her husband in the Garden of the Cross at Smith County Memorial Gardens with Bro. Larry Butler closing the services.

One of ten children, she was born Violet Frances Silcox in Carthage on September 27, 1920 and was the daughter of the late James Thomas Silcox and Lela Florence Parker Silcox.

After the death of Mrs. Martha, Mr. Jim married the former Lela Parker and their children who preceded them in death were Rosie Mai Silcox Mosely who died September 10, 1997 at the age of 72, Mary Eliza Silcox Thackxton who died July 8, 2005 at the age of 75 and one brother, Willard Horace Silcox who died October 28, 1975 at the age of 57.

She was also preceded in death by three grandsons, Steven Peter Key Dixon who died from an accident at the age of 12 on July 31, 1976, Randy Key and David Key and by a great-grandson, Keith Smotherman.

On April 16, 1937 she was united in marriage to Baxter native Dewey Owen Woodard who preceded her in death on March 20, 2002 at the age of 83 following almost sixty four years of marriage.

Mrs. Woodard was a member of the Full Gospel Tabernacle in Lebanon.

A skillful and gifted seamstress, she was retired from the former Key Hollow Corporation in the Monoville Community and had also worked at the former Carthage Shirt Corporation.

She loved cooking for family and was respected and loved by all who came in contact with her. She had a ready smile and cheerful attitude in all her endeavors.