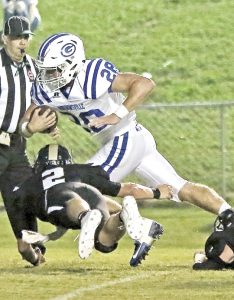 Last Friday night’s high school football showdown between the Smith County High Owls and the Gordonsville High Tigers offered a momentous and unforgettable night for the visiting Tigers while the Owls suffered a 20-12 defeat at the hands of their bitter rivals. The Big Blue win ended the Owls’ four game winning streak in the rivalry and for the first time in 20 seasons — the program handed Smith Co. a loss on their home turf. “It feels pretty good,” said Gordonsville High head coach Scott Clemons who was an assistant on the Tigers’ 1998 team — the last one to defeat the Owls in Carthage. “I ain’t gonna lie to you. There has been several times over the years that we have had chances to win here and we did not. We made some mistakes here and there, but it is still early in the year.” Smith Co. had their chances in the game — advancing the ball deep into Tiger territory twice without finding the endzone in the eventual one possession loss.

“I thought Gordonsville had a good game plan and they executed well and didn’t make mistakes,” said Smith Co. head coach Mike Dickerson. “We made two big mistakes in the red-zone which cost us opportunities to score. We had a couple of key injuries which hurt us and, when you have a lack of depth, that really shows up.” The Tigers utilized their veteran offensive line and the strong running of senior running back Braxton Givens to rack up 272 total rushing yards. Givens led the Big Blue rushing attack with 207 yards on 30 carries and he accounted for all three of the Tigers’ touchdowns. “I felt like tonight — if we did what we needed to do — we were going to take care of business,” said Clemons. “I thought our offensive line blocked well and Braxton (Givens) ran well, of course. Our quarterback made some plays when he needed to. We had some holding penalties that put us behind the chains a few times. I think if we had not gotten them we could have punched another one or two in.” Clemons also mentioned the Tiger faithful who had waited two decades to see the program claim a victory at Owl Stadium and how his team worked to accomplish the feat.

“Overall, I am so happy for these young men,” said Clemons. “They have worked hard this winter. They deserved to know what this feels like. It is a great win, I am tickled for our community and everybody that was here.” Givens’ punishing rushing performance helped propel the Tigers to victory and vaulted him into the record books at Gordonsville High. On his 23rd rush of the game, an eight yard run in the fourth quarter, Givens broke the school’s career rushing record that was previously held by Tiger football legend Brad Cowan. After Friday’s game, the senior currently sits with 4,582 career rushing yards breaking Cowan’s previous record of 4,528. Givens entered the game needing 153 yards to tie the record.