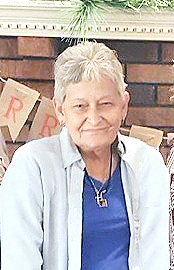 Sherrie Alyene Shoulders Dyer was born on April 23, 1953, in Davidson County, Tennessee, to Arra Alyene Watson Shoulders and the late Kenneth Giddeon Shoulders. She was one of four children born to this union. As a young girl, Sherrie was saved, and joined Mt. Tabor Missionary Baptist Church in June of 1965. Sherrie married the love of her life, Jimmy Lee Dyer, on November 9, 1973. They spent the next thirty six years together in holy matrimony. Jimmy passed away in 2009, but Sherrie loved him until the very end. Along with her husband and father, Sherrie was also preceded in death by; nephew, Derek Harper; Father and Mother-in-Law, Chester and Bessie Dyer; and Brother-in-Law, Charlie Dyer. Sherrie was a hard worker, and was an employee of Hartmann Luggage in Lebanon. She also worked at Walmart in the Deli for a year, but retired in 2017, when her health wouldn’t allow her to work any longer. When she wasn’t working, Sherrie enjoyed being on the farm, and taking care of her animals. She was especially fond of her dogs. Most of all Sherrie loved being with her family. Her Grandchildren held a special place in her heart, and Sherrie loved being around them.

On Thursday August 30, 2018, at the age of sixty-five, Sherrie passed away at Vanderbilt University Medical Center in Nashville. She will be missed by all who knew and loved her, but is resting in the arms of her Lord and Savior. Ms. Sherrie Dyer is survived by; Son, Jimmy Dale Dyer and wife, Janet Lea; Grandchildren, Leah Dyer, Tamera Dyer, Jami-Louise Dyer,