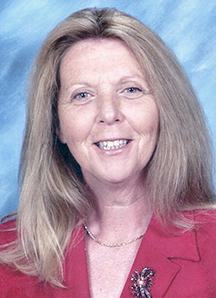 Funeral services for Mrs. Vicki Gregory Fitzpatrick will be 11:00 A.M. Wednesday, September 19, 2018, at Ligon & Bobo Funeral Home with Bro. Gary Talley officiating.  Interment will follow at 3:00 P.M. on the family farm.  Visitation Tuesday 2–7 PM and Wednesday after 9AM at Ligon & Bobo.

Born September 28, 1950, in Davidson County, she is the daughter of the late Delbert and Georgia OletaHightower Gregory.  She was a graduate of Gallatin High School, and was a member of Fountain Run First Baptist Church.  She was a stay at home mom and a farmer.  She and her husband are also in the land title business.  She was an accomplished artist and florist, and made the best fried pies and chocolate fudge.  Before moving to Kentucky, she served two terms as a Wilson County commissioner, and served as chair of the Wilson County Planning Commission.

This notice provided as a courtesy to the Fitzpatrick family.