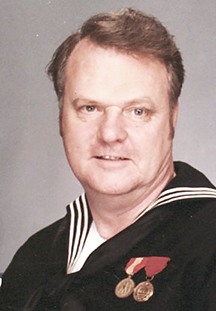 A retired Vietnam era Navy veteran has died at his Rome Road home in Riddleton at the age of 75 following a battle with cancer. His family what at his side when the death angel called.

Mr. Donald Tabor was pronounced dead at 7:34 a.m. Wednesday morning October 31, 2018 by Kindred Hospice who had loving cared for him in his final days.

Mr. Tabor had requested body donation to Restore Life in Elizabethton, TN. Following cremation he will be placed with military honors in the Kentucky Veterans Cemetery Southeast in Hyden, Kentucky.

Memorial services for Mr. Tabor will be conducted Friday afternoon November 9th at 1 p.m. from the Carthage Chapel of Sanderson Funeral Home. Church of Christ minister Kenny Westmoreland of Celina will officiate and Stephen Chambers will deliver the eulogy.

The family will receive friends at Sanderson in Carthage only on Friday from 12 noon until the memorial service at 1 p.m.

One of five children, he was born Donald Calvin Tabor in Henryville in Clark County, Indiana on January 23, 1943 and was the son of the late Joe Donald Tabor Sr. and Rosalee Hyacinth Woodlock Tabor.

Mr. Tabor was a 1961 graduate of Salem High School in Salem, Indiana.

On February 15, 1964 he was united in marriage to the former Linda Joyce Taylor. The ceremony took place in Havre de Grace, Maryland.

He proudly served our country in the United States Navy for twenty four years before being honorably discharged on June 30, 1984 at Fort George G. Meade, Maryland with the rank of Petty Officer First Class.

For his meritorious service in the defense of our freedom he was award the National Defense Service Medal, Meritorious Unit Commendation, second award and five good conduct medals.

His last foreign assignment was in Persuppdet, Rota Spain.

Mr. Tabor was of the protestant faith.

With twenty two years of government service besides his military career, seventeen of those years were with the National Security Administration.

In 2005 following retirement he and his wife relocated to Smith County from Pasadena, Maryland.

Since relocating to Tennessee he had served as a substitute teacher from 2005 until becoming ill in early 2018 for the Smith County School system.

The Tabor family requests memorials to the American Cancer Society.