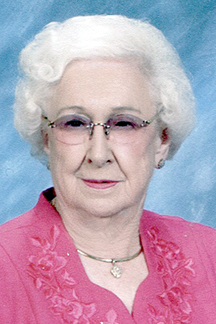 Retired Tuckers Cross Roads businesswoman and Smith County native Mrs. Minnie Hackett Harlan died peacefully Saturday November 10th at 2:56 a.m. the Pavilion in Lebanon where she was making her home since moving from Hearthside in Lebanon. Mrs. Harlan was 99.

The Harlan family will receive friends at Ligon & Bobo only on Wednesday from 11 a.m. until services at 1 p.m.

Mrs. Harlan was reared in the Beasleys Bend Community after her family moved from the Monoville Community in 1930.

On March 15, 1952 she was united in marriage to Tuckers Cross Roads Community native Thomas Glenn Harlan who preceded her in death on November 16, 1997 at the age of 85 following over forty five years of marriage.

For over thirty five years Mr. and Mrs. Harlan owned and operated the Harlan’s Grocery in the Tuckers Cross Roads Community and resided behind the store.

Before her retirement most of her life was spent in sales and for twelve years she was employed with the Castner-Knott Co. store at 6th and Church in Nashville.

Mrs. Harlan was active in her church, civic organizations and her community of TXR.

For over sixty years she had been a member of First Baptist Church in Lebanon where she worked as a volunteer in the Prayer Room and as a group Captain in the LLL Club (Live Long & Like It). She was a member of the Tuckers Cross Roads Home Demonstration Club, now the F.C.E. Club, for over sixty years where she served as club president for many years. In 2009 Mrs. Harlan won the Best of the Best Award along with many other awards for her arts and crafts.

She was also a member of the Cedar Senior Citizens where she served as secretary of the Board of Directors.

In 2009 she moved from her Lebanon home to Hearthside Retirement Center and in 2017 she became a resident of the Pavilion.

The Harlan family request memorials to the Jordan Hackett Foundation.