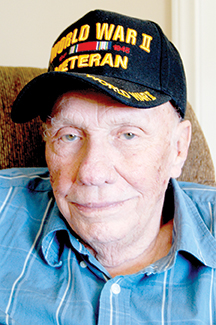 It’s been over 73 years since Lucius Agee flew on a bombing mission, but in his mind’s eye the 94-year-old World War II veteran can picture it clear as day, even though he performed his duty in the dark of night. “My big job was to interpret what was on the screen,” said Agee, a Navy aviation radioman, who once dropped a depth charge on a Japanese submarine from 25 feet. “Coming back from a mission, it’s black as pitch. There’s a screen full of speckles. We called them blips. One of them is your ship. You’ve got to find it and get on it.

“I’m not a big hero. I just did what they told me to do. My job was to get ’em to the target and back. It was hard. Black at night. No GPS. Your ship was 200 miles from where you left it. If you couldn’t find it, you’re going into the water.” Agee, who was born in Watertown on April 6, 1924, is called Lucius by his kinfolk and Luke by his friends and business associates. The retired engineer, who still has a shop in Lavergne, recently moved with his wife, Aline, into an assisted living complex, the Bridge at Hickory Wood, in Antioch. Earlier this year, he released a short memoir, “I Remember World War II.” His memories of those days and his childhood remain crystal clear. His father, Arthur Agee, died when he was 8, so his mother, Mattie Elizabeth Hickey Agee, took Lucius, his sister and two brothers to live with their grandfather, Sion Agee, in Hickman in Smith County.

“In Hickman we had a great life, but we were poor,” said Agee. “My oldest brother was 10 years older than me. He went to CCC [Civilian Conservation Corps] camp. My sister was seven years older, and she went to live with a cousin and worked at a shirt factory. That left me and my younger brother and my mother. “We made out. My brother and I built the fire in the stove of the three-room schoolhouse at Hickman Elementary every morning and made $3 a month. We had to milk a cow before we left for school. I played basketball at school, and we had a swimming hole at the creek, and we’d go possum and skunk hunting at night and sold the skins.” After attending Gordonsville High School for three years, Agee moved with his mother to Nashville in 1942 and graduated from East High School in June 1943. Two months later he was drafted.