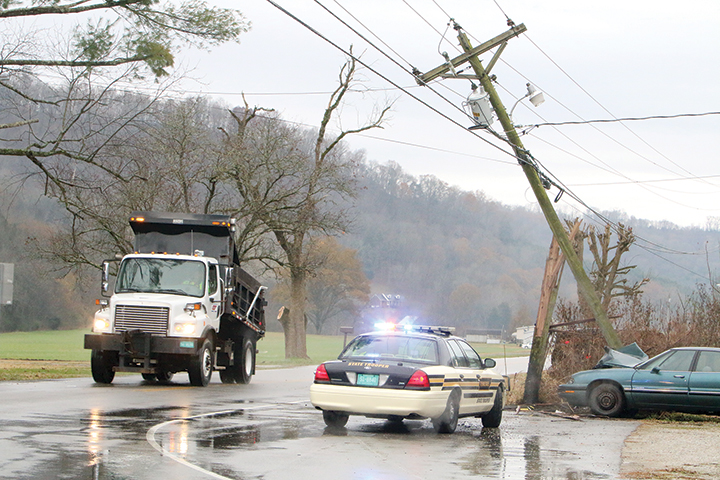 Icy conditions caused travel problems in one area of the county, Thursday morning. After sunrise a light drizzle began. Rainfall froze on bridges along Pleasant Shade Highway, resulting in at least two accidents. The most serious accident occurred at the intersection of Little Creek Road and Pleasant Shade Highway at the former Shoulders’ Garage. A Jeep left the roadway and overturned before striking a utility pole and a parked vehicle. The utility pole was broken in half. Wires dangled above the intersection but did not fall onto the roadway. According to the Tennessee Highway Patrol two people were injured in the wreck which occurred around 7:40 a.m.

The vehicle, a 2011 Jeep Wrangler, was driven by Tammy Triplet, 49, Lebanon, who was transported to Riverview Regional Medical Center. A passenger in the vehicle, Tamira Triplet, 18, Lebanon, was also transported to Riverview Regional Medical Center. Both were transported non-emergency. According to the highway patrol, “Triplet was traveling south bound on State Route 80/Pleasant Shade Highway when she lost control of her vehicle while crossing an iced over bridge. Triplet’s vehicle struck a 1997, Buick LeSabre, parked on the right side of the road.

After impact, Triplet’s vehicle struck a utility pole and overturned in a ditch before coming to a final rest upright, off the roadway and facing west. After the impact the Buick came to final rest facing east.”