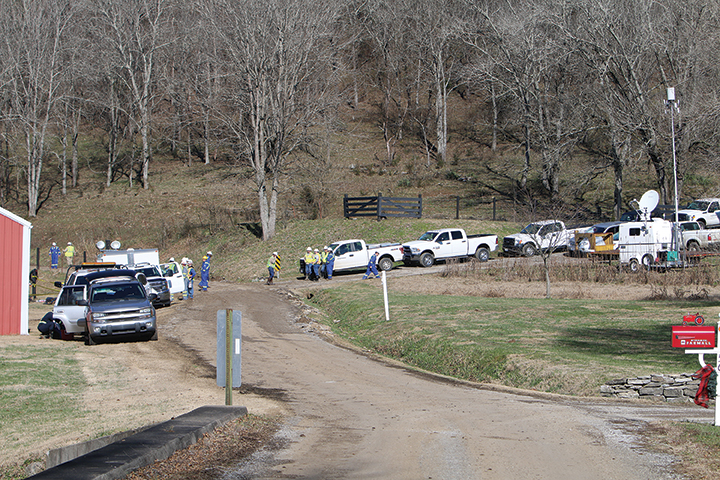 A natural gas line explosion rocked the Pleasant Shade community, Saturday. Meanwhile an investigation into what caused the explosion is being conducted by the company which owns the gas line. While no one was injured, the community is fortunate. The explosion sent tons of dirt and rock into the air, some of which landed on a house, shop, barn, farm equipment on the farm of Scott and Ramona Wilmore and onto a nearby county road, Stone Branch Road.

The blast, which occurred around 2 p.m., was described as lasting “minutes”, could be heard miles away and left a hole described as deep enough to set a bus inside. “Had someone been traveling the road there could have been a different outcome,” said Emergency Management Agency (EMA) Director Sonny Carter.

In order for the roadway to become passable, rocks and dirt from the explosion had to be removed by the county road department. Carter estimated the blast was approximately 50 to 60 feet from the county road. The EMA director said some nearby residents thought an earthquake had occurred while others thought it was an airplane crash. Carter estimated it took around 45 minutes to get the freely flowing natural gas shut off after the explosion. The sound of the escaping natural gas was described as that of a “hundred jet” engines running.