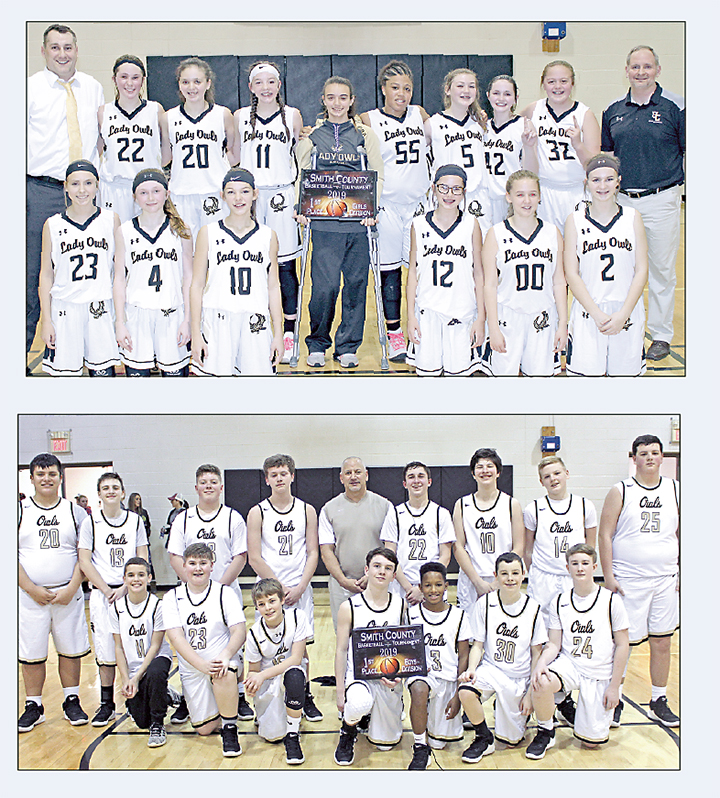 The top seeded and undefeated in county play Smith County Middle School Owls defeated the No. 2 seed Forks River Bulldogs to take home the Smith County Elementary boys division tournament title last Saturday. The win completed the first Smith County Middle sweep of the county tournament since 2008 — with the Lady Owls winning the girls championship on Saturday also. The Owls, directed by head coach Todd Hess who is in his first year at SCMS, utilized a 14-2 second quarter run and a 16-8 blast in the final six minutes to topple the Bulldogs.

The host of this year’s Smith County Elementary tournament claimed the girls division title as the Smith County Middle Lady Owls claimed the title with a 37-18 victory over the Forks River Lady Bulldogs in last Saturday’s championship game. Lady Owls head coach Joseph Hiett, who won his first county title while at the helm at Smith Co. Middle with the victory, discussed the impact of the win. “I thought the girls played really hard,” said third year Smith Co. Middle head coach Hiett. “It has been a building process to get here. Hats off to Forks River, this was their fourth straight championship game. Coach Carr does a great job. She knows how to get her program here. I am just very proud for my program and for my school.” The Lady Owls, who entered the tournament as the No.1 seed, were able to capture the championship on their home court and dethroned the defending champions in the process.