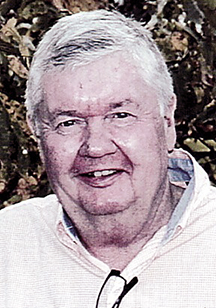 Friday afternoon February 8th funeral services before and overflow group of attendees were conducted from the Carthage Chapel of Sanderson Funeral Home at 1 p.m. with Mr. Apple’s minister, Edward L. Anderson officiating. Mr. Apple’s brother-in-law, Dr. Buckie Parsons and son-in-law Elston Gibbs delivered eulogies as did his friends, Jim Evans, David Hunter and Jerry Pack. Also at the end of the services his two grandchildren, Jaden Apple-Gibbs and Kaelyn Ward spoke of their love for their grandfather. Burial followed in the Apple family lot in the Garden of Gethsemane at Smith County Memorial Gardens.

One of three children of Smith County natives, Mrs. Mary Helen Wright Apple of Livingston and the late Mr. Freeman Ward Apple who died at the age of 68 on May 1, 1987, he was born Don Freeman Apple in Livingston on October 2, 1953.

March 31, 1977 at the Livingston Church of Christ he was untied in marriage to Livingston native, the former Rita Kaye McCormick. The ceremony was officiated by minister Stanley McHenry.

Mr. Apple and his wife relocated to Carthage from Livingston in 1989 following the death of his father to operate the Mixon-Nollner Oil Co.’s in Carthage and Lafayette.

As present owners and operators of the oil company, Donna and Rita worked side by side daily in the operation and Donnie served as President of the Corporation.

Mr. Apple was a 1972 graduate of Livingston Academy and graduated from the Livingston Vocational School certified in welding.

His favorite pastime, beside his family, was karate. He was a 5th Black Belt and was also currently an instructor at the Hunter Karate School in Livingston.

As a younger man he was active in the Jaycees and was a former President of the Smith County Chamber of Commerce.

Mr. Apple was a member of the Carthage Church of Christ.

The Apple family requests memorials to either the Jackson-Smith Youth Camp or the Jordan Hackett Foundation.