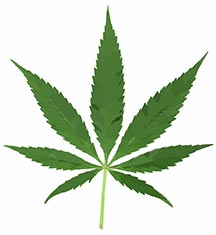 A sheriff’s department deputy located a pound of marijuana hidden under the hood of a vehicle during a traffic stop.

While on patrol, the deputy noticed a vehicle with a window tint law violation and without a visible license plate. “As I pulled behind the vehicle, I observed a plastic bag go out the passenger side window. I then made a traffic stop on the vehicle at the 259 mile marker in the east bound lanes,” reads an offense report filed by Deputy Thomas.