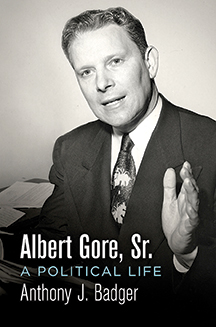 A new biography on Albert Gore Sr. proves an enlightening examination of the Tennessee maverick, one of the South’s leading Democrats on Capitol Hill in the mid-20th century, while simultaneously detailing the transformation of Southern politics of those times. “Albert Gore, Sr.: A Political Life,” written by Anthony J. Badger and published by the University of Pennsylvania Press ($34.95, 343 pages), according to the author, “seeks to explain the underlying rhythms of Gore’s political career,” while his story “enables us to examine the role of race in the creation of the modern Republican Party in the South.”

For many, if not most, of us ignorant about the Smith Countian’s career in Congress from 1938 to 1970, the book is a sobering account of a man who in many ways was a stubborn cuss that at times infuriated presidents as well as members of both political parties as he stuck to his guns on what he believed was best for his country. During Gore’s adventures on the Hill, a Washington, D.C., columnist described him as a “Tennessee hills version of Tom Dewey without the moustache: smart as a whip, bright as a new silver dollar, with a gift for ardent oratory.

You might take him for a successful young Baptist preacher who coaches freshwater college football on the side. He has a marked enthusiasm for down-to-earth things.”