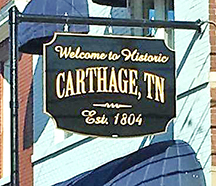 The city of Carthage will no longer be picking up brush from homeowners. In recent months, the county landfill has stopped taking brush from the city. Mayor Sarah Marie Smith informed council members officials with the county landfill were told by the state’s department of environment and conservation the landfill did not have a permit for discarding brush. Since the landfill stopped taking the brush, the street department has been piling the brush in a vacant area at city hall. City officials say costs to dispose of the brush is excessive.

During prior discussions, the council has debated purchasing a wood chipper, but the chips would also have to be discarded. Also, there are regulations against open burning in the city. “For those who live in town who have no where to burn their brush, it’s a problem,” commented Councilman Sam Petty, who told fellow council members he knew of someone in the Brush Creek area who might accept the brush but has not been able to contact him. Councilman Barbara Kannapel, who is also a county commissioner, informed council members the county was looking at solutions to where it could accept brush at the landfill in the future.