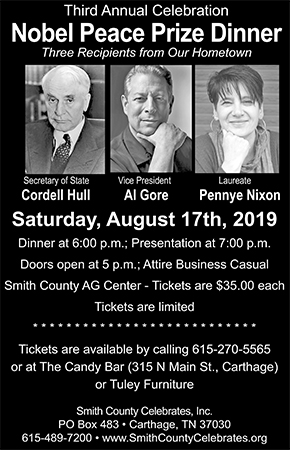 This prize is modeled after the Nobel Prize for Peace and has been awarded to peace makers from the Tacoma/Pierce County Washington region since 2005, when the Sons and Daughters of Norway teamed up with Pacific Lutheran University. Both these organizations speak volumes about what their communities value. Every year the GTPP board works on ways to promote peace through research and skills training. But the most visible contribution is honoring ‘champions of peace’, as Swedish inventor and tycoon Alfred Nobel once called them. Tacoma is one of a few cities in the U.S. that gives out the prize and only one that has a relationship with the Nobel Peace Committee in Norway and sends its annual winner to the award ceremony. It’s in Norway where these two celebrations come together.
For additional information about the event or ticket information contact Smith County Celebrates at 615-270-5565 or P.O. Box 483 Carthage, TN 37030.