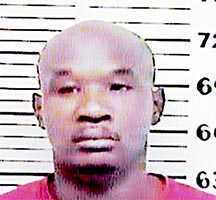 A man who led Tennessee Highway Patrol troopers and local authorities on a high speed chase which ended in a crash on a deadend street in South Carthage faces multiple charges. The incident began when Trooper Troy Withers stopped a vehicle traveling west bound on Interstate 40 for speeding.

According to the state trooper, the driver was clocked traveling at 85 miles per hour in a 70 miles per hour speed zone. The driver initially stopped, pulling onto the shoulder of the interstate. After approaching the vehicle, Trooper Withers observed marijuana in the passenger seat and went back to his patrol car until backup arrived.

When backup arrived, Trooper Withers returned to the vehicle, asking the driver to step out of the 2019 Hyundai Accent. Instead, the driver sped away, resulting in a pursuit. Elton James Spain, 43, Conway, South Carolina, faces multiple charges as a result of the pursuit.