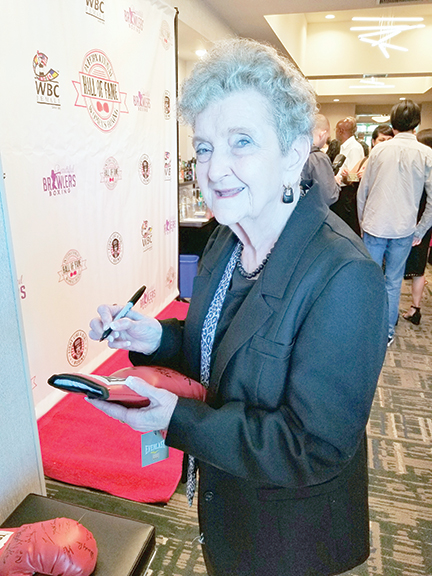 Longtime Smith Countian Was 1949 Lady Boxing Champ of the World

It’s been nearly 70 years since Pat Emerick Lancaster Landreth went blow for blow with another woman in the boxing ring. Due to her ability to put up her dukes, she recently landed, not on her back, but as one of the newest members in the International Women’s Boxing Hall of Fame.

The ceremony occurred Aug. 30 in Brisbane, Calif., as the longtime Smith Countian, who fought her last professional match in 1950, joined eight other women boxers in the I.W.B.H.F.’s sixth annual event.

Inducted in the Pioneer Female Boxer category, she entered under her maiden name, Pat Emerick, which she used as a boxer.

Now back home near Hartsville, Landreth shared thoughts about her big night, saying, “It was so nice to be recognized after all this time. I was amazed that there were this many ladies still boxing. Where I live we don’t hear anything about these great ladies. I am so glad that we opened the door for all women in all avenues and so proud of how far the lady boxers have come.”