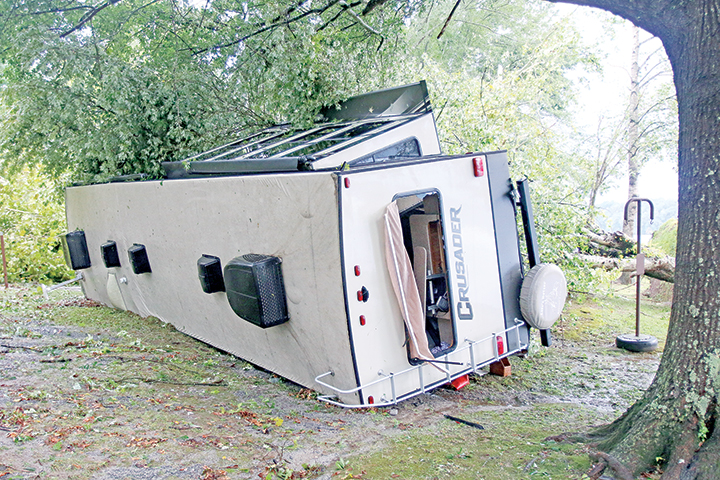 At least two people were injured when a fierce storm with high winds and heavy rainfall struck the northern section of the county, Tuesday afternoon. Two people were transported by ambulance, non-emergency to Riverview Regional Medical Center from the campground at the Defeated Creek Recreational Area where much of the damage was reported.

There were also reports of significant damage/downed trees in McClures Bend and Ash Hopper Hollow in the Defeated area. At the Defeated park, one camper was toppled and others were damaged by high winds and falling limbs. Some trees and sections of trees were blown down in the park.

When the camper overturned, a man was trapped inside. Once the high winds subsided, nearby camper’s rushed to the camper’s aid breaking out a window. Rescue squad personnel and Defeated Creek Fire Department were dispatched to the scene and helped free the man from the camper. The county ambulance service transported the storm victim to the hospital. Shortly afterward, a woman was reportedly being attended to by a nurse in the campground.

The woman, who was transported by ambulance to the hospital, was injured when an awning fell.