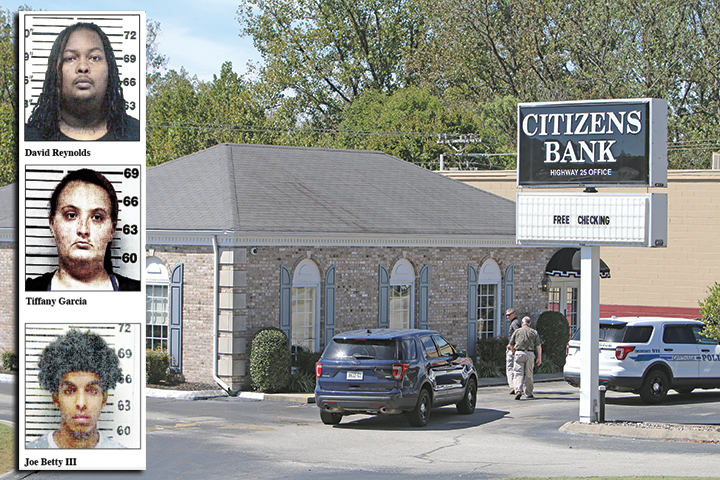 Four people face charges in connection with the armed robbery of Citizens Bank’s Highway 25/Dixon Springs Highway office. Those charged include three adults (two males and one female) and one male juvenile. All suspects are from Gallatin but some have lived in other counties surrounding Davidson County. The three adults were charged by the Federal Bureau of Investigation (FBI), while a 17-year-old juvenile from Gallatin was charged by Carthage police with aggravated robbery. The three adults include Joe Allen Betty III, 22, Gallatin, Tiffany Renee Garcia, 27, Gallatin, and David Ray Reynolds, 28, Gallatin.

The three adults have been charged by the FBI in a federal complaint with bank robbery. The four suspects are accused of taking thousands of dollars in cash during the robbery. All of the money believed to have been taken was recovered when the arrests were made. How it started: At approximately 12:40 p.m., Tuesday (September 24), an employee of Citizens Bank’s Highway 25 office contacted the sheriff’s department notifying law enforcement authorities a robbery had taken place at the bank. Police Chief Britt Davis and Sheriff Steve Hopper were in the area of Highway 25 and first to arrive on the scene.

The two arrived at the bank seconds after sheriff’s department dispatcher Debbie Grisham dispatched the call. Three male subjects entered the bank’s front doors and walked up to a teller. It was unknown at the time a female was behind the wheel of a getaway vehicle believed to be stationary in the Tractor Supply parking lot.