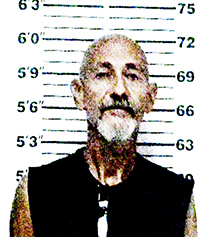 The sheriff’s department K-9 unit discovered a significant indoor marijuana grow operation following a traffic stop, Friday night. The investigation led to what was described as “19 large marijuana plants” which when confiscated and harvested resulted in 24.4 pounds of (non-dried) marijuana.

The investigation began when Sgt. Junior Fields and Deputy Ray Biggs stopped a 2002 blue Dodge Durango. According to an offense report filed by Sgt. Fields, the discovery of a small jar led to something much bigger. The driver of the vehicle was identified as Michael G. Fish, 57, Brush Creek.