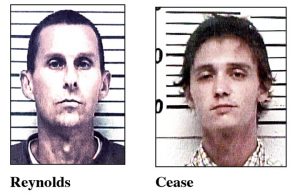 Nineteen-year-old Cameron Wilson died on Hobson Pike in Davidson County in June, investigators say. The Smyrna resident’s body was discovered by a fisherman beside the railroad tracks off Sebowisha Lane on June 9, according to the Tennessee Bureau of Investigation (TBI). Wilson is believed to have died in an incident which occurred three days prior to the discovery of his body, according to the TBI.

On September 10, following a TBI homicide investigation, two men were indicted by the Smith County Grand Jury for discarding Wilson’s body in Lancaster. The indictment was sealed until their arrests last Monday (October 21). Donald Lee Reynolds, 41, Antioch, and Justin Gage Cease, 31, Lexa, Arkansas, face abuse of a corpse charges in connection with the case.