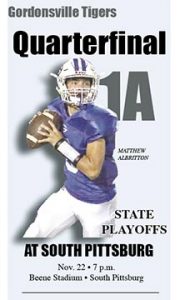 BREAKING: GAME MOVED BACK TO FRIDAY

DUE TO POTENTIAL WEATHER, THE GHS – SO. PITT GAME HAD BEEN MOVED TO THURSDAY NIGHT AT 7 PM, IT IS NOW BACK ON FRIDAY AS ORIGINALLY SCHEDULED.

The Gordonsville High School football team’s Cinderella run through the Class 1A playoffs will face its toughest obstacle when the Big Blue travels to South Pittsburg for a meeting with the undefeated Pirates. South Pittsburg has been atop the Associated Press Class 1A poll for most of the season as they have rolled their way to an 11-0 record. Gordonsville entered the postseason with a 3-7 record as the third seed out of Region 4-1A .

The Tigers topped Region 3A No. 2 seed Copper Basin 20-6 on the road in the opening round. Last Friday night, Gordonsville hosted fourth-seeded Whitwell at Turney Ford Field after the visiting Tigers upset Region 4-1A champion Monterey in the first round. The blue-and-white clad Tigers took down Whitwell 17-7 in a physical and low scoring affair — setting up another playoff meeting with the Pirates. The Gordonsville-South Pittsburg playoff rivalry includes 14 previous battles with the Pirates owning a 9-5 advantage in the clashes.

The two programs met last season in the second round of the Class 1A playoffs at Turney Ford Field as the Pirates won 27-14 in a battle for Class 1A heavyweights.