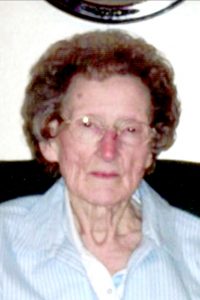 Longtime Defeated Creek community native and homemaker, Mrs. Joella Shoulders Gregory of Carthage, died at 12:09 p.m. Friday afternoon, February 21, 2020, at the Smith County Health and Rehabilitation Center in Carthage where she had made her home since November 29, 2006.

Mrs. Gregory’s former husband and the father of her daughter, William Enslie “Wid” Shoulders, died at the age of 39 on May 6, 1964 as the result of a massive heart attack.

Mrs. Gregory was saved at the age of 13 in a summer revival and was baptized into the full fellowship of the Cornwells Chapel Missionary Baptist Church in the Defeated Creek community on October 2, 1938 by then pastor, the late Eld. A. J. Sloan.