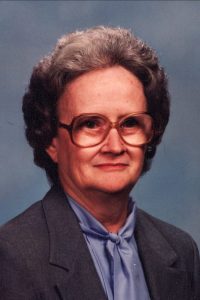 Mrs. Carolyn Carter, loving known as Sissie, of Carthage and a longtime resident of the Riddleton community, died peacefully at 10:18 p.m. Monday evening, April 20, 2020, at the Smith County Health and Rehabilitation Center in Carthage where she had resided since January 30, 2015. Mrs. Carter died at the age of 93, two days before her 94th birthday.

Eld. Anthony Dixon officiated at the 11 a.m. gravesides services which were conducted on Wednesday morning on what would have been Mrs. Carter’s 94th birthday and the day her husband died thirty four years earlier. Burial followed beside her husband in the Carter family lot in the West section at the Dixon Springs Cemetery.

Her only sibling, Harriett Elizabeth “Bitsy” Gibbs Rigsby, preceded her in death on June 7, 1996 at the age of 72.

She was united in marriage to Riddleton community native Frank Hartley “Hart” Carter and he preceded her in death on April 22, 1986 at the age of 64.

Mrs. Carter was saved at a young age and was baptized into the full fellowship of the South Carthage Missionary Baptist Church.

She was a 1945 graduate of Smith County High School where she served as vice-president of her senior class and treasurer of the Commercial Club, played basketball and was a member of the “C” Club.

She was a longtime employee of the former Carthage Shirt Corporation and she and her husband, Hartley, operated their family farm on Bowman’s Branch in the Riddleton community.