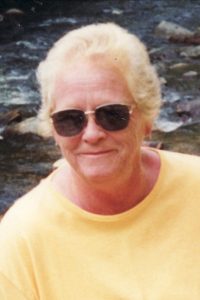 Mrs. June Hiett Woodard, of Gordonsville and a longtime resident of Sloan Branch Road in the Pleasant Shade community, died at 7:55 p.m. Sunday evening, April 19, 2020, at the age of 77 at the Lancaster Highway home of her daughter, following a period of declining health. She was under the care of Caris Hospice of Cookeville.

Mrs. Woodard was at the Carthage Chapel of Sanderson Funeral Home. Private services for the family only were conducted and burial was beside her husband in the Garden of Everlasting Life at the Smith County Memorial Gardens.

Mrs. Woodard was preceded in death by her twin sister, Betty Jean Hiett Dillard, who died March 26, 2008 at the age of 65 and Trudy Gaye Hiett, who was one of four Smith County teenagers killed in a two car automobile accident in the Bellwood community of Wilson County July 21, 1967 at the age of 14. Also a brother, Harold Wayne Hiett, preceded her in death on January 4, 1975 at the age of 34.

In Jacksonville, North Carolina on February 2, 1964 she was united in marriage to Elmwood community native James Stanley Woodard, who died June 16, 2008 at the age of 65, following over forty four years of marriage.

Mrs. Woodard was also preceded in death by a son, Randy Wilson Petty, who died of a sudden heart attack on April 18, 2010.

Mrs. Woodard was an employee of the former Carthage Shirt Corporation, working there from 1958 until the closing in 1993 and for one year was employed by the Highlander Corporation, who purchased the shirt manufacturer and operated for one year until finally closing the operation in 1994.

She was of the Baptist faith.

The Woodard family requests memorials to the Disabled Veterans.