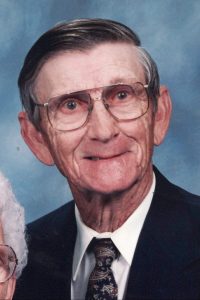 Mr. I. H. Wilmore, age 97, of the Graveltown community, a World War II veteran and lifelong farmer, died at 4:45 a.m. Monday morning, May 4, 2020, at the Alvin C. York V.A. Medical Center in Murfreesboro. He had resided at the Tennessee State Veterans’ Home in Murfreesboro since November 9, 2017.

Mr. Wilmore was at the Carthage Chapel of Sanderson Funeral Home where his funeral services for the family were conducted Wednesday afternoon at 1 p.m. His longtime former pastor, Eld. James Thomas Gibbs, officiated at the services. Burial with full military honors followed beside his wife at the Pleasant Shade Cemetery.

In Nashville on March 10, 1943 he was inducted into the United States Army and served his basic training at Camp Forrest, Tennessee. He was transferred to Africa on September 21, 1943 and on to Italy where he was a Sub-Machine Gunner in the Italian Campaign until returning to stateside on May 23, 1944.

For his unselfish service he was awarded a European African Middle Eastern Theatre Ribbon, a Bronze Star for the Italian Campaign, and a Combat Infantry Badge.

Mr. Wilmore related the story how his platoon came under attack by the Germans and he hid in a snow bank for three days before he heard American Troop voices and came out of hiding and had severe frost bite on his feet and legs.

He was honorably discharged with the rank of Private at Camp Crowder, Missouri on March 10, 1945 and was one of a few World War II Veterans surviving in Smith County.

In Bowling Green, Kentucky on February 2, 1946 he was united in marriage to Sycamore Valley community native Bessie Elizabeth Jones. She preceded him in death on January 30, 2005 at the age of 82, lacking three days before being fifty nine years of marriage.

Mr. Wilmore was saved at an early age and was baptized into the full fellowship of the Mt. Tabor Missionary Baptist Church where he was a faithful member and dedicated Deacon.

Mr. Wilmore is survived by his daughter, Marilyn Wilmore Johnson, of Brentwood.