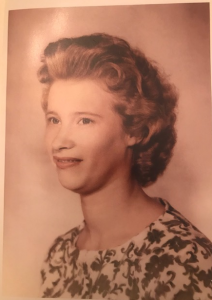 Wilma was born to Chester Lee & Ina Lee Grisham Lynch in Elmwood, on November 23, 1935. She went to school in Elmwood until the death of her mother and had to quit to help care for her siblings.  A longtime resident of Elmwood until later about 1975 moving to Oklahoma, then to Kansas, back to Oklahoma spending time with her children there and then returned Elmwood to care for her dad before he passed.  Then about 2005 moved to Red Boiling Springs and lived her life to the fullest.  She was able to travel some later in life and see the ocean for the first time ever in November 2017.  She worked many years for the local shirt factory, Boot Barn, Stockyard Café, Key Stop, whatever it took to help keep her family cared for.  She loved sitting on her front porch crocheting, knitting, growing her enormous flower gardens, Quilting was her favorite past time of all, other than cooking for everyone.

Wilma loved her family even though they all did not live near her.  She always opened her home to those that came to spend their time with her.

Our family is forever grateful for the love she shared and the time she spent with us.  Each and every one had a special place in her heart.

The family wishes to extend their gratitude to Avalon Hospice for all the care and support.

Neighbours Life Celebration Services will be handling the arrangements.