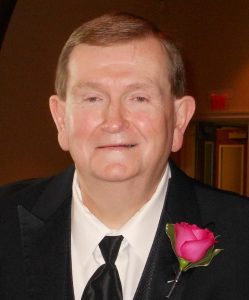 Graveside services were conducted by his beloved pastor, Rev. Charles Maynard, on Saturday afternoon, July 18th, at 1 p.m. from the Chestnut Mound United Methodist Church Cemetery. Burial followed beside his parents and infant sister in the Lambert family lot.

He was preceded in death by an infant sister, Betty Jo Lambert, who died shortly after birth on June 25, 1951.

On December 22, 1972 he was united in marriage in Waynesboro, Tennessee to Waynesboro native, the former Jane Jenkins.

Following high school graduation, he attended the Tennessee Technological University in Cookeville where he graduated in 1969 with a degree in finance.

He later became the Chief Financial Officer for Smith County Bank in Carthage in the seventies.

Mr. Lambert was a family man and enjoyed especially his four grandchildren, to whom he enjoyed reading books, was a devoted husband and father to his two daughters.

His favorite pastime was Tennessee football and grilling with his family.

He was a faithful and dedicated member of the Cokesbury United Methodist Church in Knoxville.

Surviving, in addition to his wife of over forty seven years, are their two daughters, Emily Blackwell and husband, Joe, of Dallas, Georgia, Laura McLean and husband, Michael, of Knoxville; four of the most precious grandchildren that ever lived, Mary Grace and Maggie Blackwell, Reed and Cole McLean; brother, Eddie Lambert and wife, Rita, of Jacksonville, Florida; several nieces and nephews.