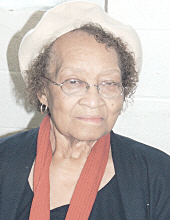 A grand lady who has assisted in the delivery of hundreds of newborns at the former Smith County Hospital which is now called Riverview Regional Medical Center has gone to her heavenly reward.

Mrs. Lucille Garrett age 92 of Carthage died peacefully at the Smith County Health and Rehabilitation Center in Carthage where she had made her home exactly one year to the day since July 25, 2019 and the death angel called at 7:20 p.m. Saturday evening July 25, 2020.

A Celebration of Life for this great lady was conducted Friday afternoon July 31st at 1:00 p.m. from the Carthage Chapel of Sanderson Funeral Home with officiating. Burial followed in the Garden of the Cross at Smith County Memorial Gardens. Rev. Willie Cameron and Bro. Voyd “June Bug” Hogan Jr. officiated at the services.

Mrs. Garrett was preceded in death by seven of her eleven children, twins who died at birth and John Glen Garrett, Lauretta Garrett Richardson, Ronald Garrett, Teresa Garrett Hill and Jimmie Garrett who died in an automobile accident at the age of 50 on July 25, 2009.

The father of her children, Robert Haskell (Hack) Garrett of the Riddleton Community, died at the age of 66 on October 28, 1985.

Mrs. Garrett was employed as a delivery nurse at the former Smith County Hospital and retired with over thirty three years of dedicated service.

She accepted Christ as her Lord and Savior at an early age and was a member of the Mt. Olive Baptist Church in Carthage where she had a long tenure as an usher at church services and at funeral services. After her long tenure as an usher she was selected by her congregation to become a “Church Mother”, which is an honor bestowed until death.

As were others of her time, she was educated in elementary school in the Smith County School System and attended high school at the Wilson County High School.