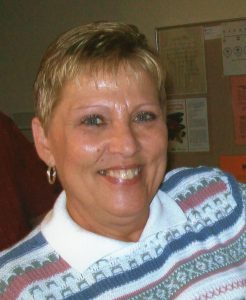 Mrs. Susan (Sue) Gibbons, of Carthage, died at 10:50 a.m., shortly after arrival at the Riverview Regional Medical Center in Carthage, after being discovered by a neighbor in an unresponsive state at her Horizon Circle home. Mrs. Gibbons was 63.

Mrs. Gibbons will be cremated at Cumberland Family Services in Algood and memorial services will be conducted from the Carthage Chapel of Sanderson Funeral Home on Thursday evening, July 30th, beginning at 6 p.m. with Don Bryant officiating at the services. Private services for the family only will be at her daughter’s grave in section three at the Ridgewood Cemetery.

The Gibbons family will receive friends at Sanderson in Carthage on Thursday afternoon, July 30th, from 4 p.m. until 6 p.m.

Born Susan Kay Mirkle in Prairieville Township in Plainwell in Allegan County, Michigan on November 12, 1956 at the William Crispe Hospital in Benton in Barry County, Michigan, she was the daughter of the late Charles Berton Mirkle and Wilma Myrtle Root Mirkle.

Mrs. Gibbons was preceded in death by her daughter, Crystal Sue Padgett, who died at the age of 37 on April 27, 2019, following a two year battle with leukemia.

Before Mrs. Gibbons retirement she was employed by the Sun Trust Bank for over twenty years.

Mrs. Gibbons was a 1974 graduate of East Bay High School in Ruskin, Florida.

Surviving is her son, Daniel Padgett and wife, Jada Loftis Padgett, of the Defeated Creek community and their four children, Tucker, Beau, Kolt and Kutler, all of the home; three sisters, Jody Hamilton of Orlando, Florida, Barb Stinger of Luther Valley, Michigan, Debra Root of Muskegon, Michigan and a brother, Chuck Mirkle of Lake Wells, Florida.

The family requests in stead of flowers memorials be made to assist with the funeral expenses.