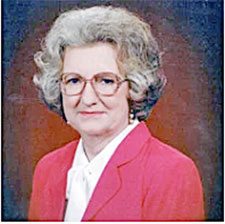 Mrs. Ricketts was born November 21, 1936 in Lebanon, TN, a daughter of the late Charlie Bethel Jones and Willie Belle McKnight Jones. She married Floyd D. Ricketts on October 28, 1960 and he preceded her in death on December 15, 2012. She was also preceded in death by Brothers; Charles Jones, Herbert Jones, Phillip Jones, Lamuel Jones, and Joseph Robert Jones, and Sisters; Dean Filson, Vertrease Edwards, and Sue Thompson.

Funeral Services for Mrs. Ricketts are scheduled to be conducted from Ligon and Bobo Funeral Home in Lebanon, TN, on Tuesday, August 18, 2020 at 2PM with Bro. Barry Keene officiating. Interment will follow in the Wilson County Memorial Gardens.

Visitation with the family will be at Ligon and Bobo Funeral Home on Tuesday from 11AM until service time at 2PM.