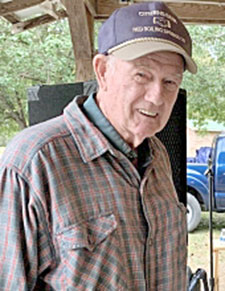 Mr. Roy Brooks, of the Russell Hill Community, died peacefully at his Petty Road home at 5:07 p.m. Saturday evening August 29, 2020 at the age of 85 surrounded by his loving family who had cared for him during his battle with cancer. He was pronounced deceased by Caris Hospice of Springfield at 7:10 p.m.

Funeral services from the Carthage Chapel of Sanderson Funeral Home are scheduled to be conducted Wednesday afternoon September 2nd at 1 p.m. Eld. Jason Goad will officiate and burial will follow in the Brooks family lot at the Davis Cemetery in the Russell Hill Community.

The Brooks family will receive friends at Sanderson in Carthage on Tuesday from 1 p.m. until 8 p.m. and on Wednesday from 10 a.m. until the services at 1 p.m.

Mr. Brooks was a gentle spirited gentleman who loved his family and always carried a smile for everyone he came in contact with.

He had a very close relationship with his brother Ronald and after the death of both of their wives they were constantly seen together walking or fishing.