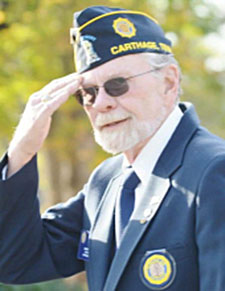 Smith County Veteran’s Service Officer since May of 2015, Mr. Fred Keith, age 73 of the Defeated Creek Community, died following a battle with lung cancer at 6:04 p.m. Sunday evening September 20, 2020 at the age of 73 at the Sumner Regional Medical Center in Gallatin where he was admitted September 18th.

In Crawfordsville, Indiana on June 13, 1970 the fairytale marriage began when he was united in marriage to the former Carolyn (Carol) Lee Shaw.

Mr. Keith proudly served our country with the United States Navy during the Vietnam War and was inducted into the military in Indianapolis, Indiana on May 6, 1965 and was honorably discharged with the rank of Ensign 6th Class at the Dam Neck Naval Air Station in Virginia Beach, Virginia on May 30, 1987.

After relocating to Smith County following military service he was employed by the Dura Corporation in Gordonsville from 1988 thru 1994.

He then began his employment in Louisville, Kentucky where he was employed by the Regal Metrology Corporation where he was an installation technician. He was employed there from 1994 until his retirement on October 1, 2011 and he and his wife moved to the Defeated Creek Community and purchased their home overlooking Cordell Hull Lake in 1995.