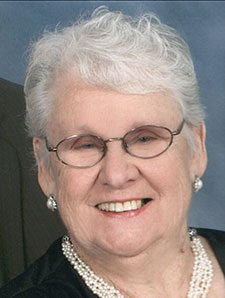 Mrs. Dot Holliman, of the Kempville Community and the Matriarch of the Holliman family, died peacefully with her family at her bedside at 6:32 a.m. Friday morning November 13, 2020 at the Smith County Health and Rehabilitation Center in Carthage where she had made her home since September 5th of this year. Mrs. Dot’s death came just thirteen days after her 90th birthday.

Graveside services for family friends and the community were conducted Sunday afternoon November 15th at 2 p.m. with Larry Cole officiating assisted by longtime friend and Billy Hollow neighbor Bro. Charles Reece. Burial followed beside her beloved husband in the Holliman Family Cemetery on the family’s Southern Cross Farm in the Billy Hollow.

Mrs. Holliman was a 1948 graduate of Joelton High School and attended Tennessee Tech.

In Athens, Alabama on May 19, 1949 she was united in marriage to William Mack Holliman of the Kempville Community, a farmer, educator, and philosopher who was a graduate of Tennessee Polytechnic Institute in Cookeville.

The couple met while Mr. Holliman was a student at the George Peabody College in Nashville and Mrs. Dot was employed at a Nashville law firm. The infatuation with one another would lead to a marriage that lasted for over sixty eight years and produced six children, twelve grandchildren and eleven great-grandchildren.

Mr. and Mrs. Holliman were preceded in death by a great-grandson, Easton Jedediah Goad who died at the age of 1 year on March 1, 2015 and by their son-in-law, well known high school football coach Patrick Allison (Pat) Dyer who died September 17, 2016 at the age of 63.

Mrs. Dot had agape love, (the highest degree of love), for her husband, children, grandchildren and great-grandchildren. She was a creative artist. She would take butcher paper and make patterns for her daughters’ dresses. Mrs. Dot fashioned and sewed many beautiful dresses for her daughters and granddaughters. Later in life she started quilting and was a member of the Morning Star Quilting Guild that met monthly at the Barn in the Defeated Creek Community. With that experience she created a number of finely crafted quilts for her children, grandchildren, great-grandchildren, family and neighbors.

Mrs. Holliman was a dedicated worker on the family farm and it was often said she was the grease that kept the wheels turning. She would work alongside the men and her children in the fields cutting tobacco, driving the tractor, tending the garden, milking the cows and cleaning the milk equipment.

She also attended to the 3,000 laying hen house that was on the Southern Cross family farm. After getting up at sunrise and working to sunset, or a little later, she would return to their home, cook and clean for her family of eight: herself, Mack and the six children.

Mrs. Dot’s door was always open for everyone who needed her! She was a phenomenal cook; there was always room at her eating table for anyone and plenty of food. Wednesday night suppers at her house were enjoyed by many. She was a master canner and tomato juice was her specialty. She took her cooking skills from the home to the workplace as a Licensed Nutritionist with HeadStart first and then with The Palace Rest Home in Red Boiling Springs before finally retiring from public work in 2003 to be a full time sitter and Nanny for her grandkids. Mrs. Dot took pride in knowing she touched many lives through her work with HeadStart.

Mrs. Dot always put her children first. She always made sure their needs were met even before considering her own. On Sunday mornings, Sunday nights and Wednesday nights, she got all six children dressed and ready for church. The Holliman home was a Christian home and the children never had to ask are we going to church today or tonight because they knew the answer.

After she raised her children, she dedicated her time to her grandchildren, bonus grandchildren and their friends. The Holliman family home doors were always open and food available. Nanny never knew which grandchildren or how many would be at her house or for how long. Little Debbie brownies were a hit and purchased by the cases. Nanny and Granddaddy always had IBC root beer for their babies.

Mrs. Holliman was a member of the Richmond Chapel Church of Christ near Gainesboro.

The Holliman family requests memorials to either the Jackson Smith Youth Camp or the Easton Goad Foundation.