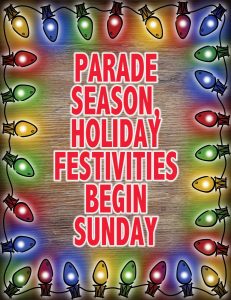 The first of two Christmas parades will take place this weekend. The annual Carthage Lions Club Christmas parade will take place beginning at 4:30 p.m., Sunday, November 29. Traditionally, the parade is held the first Sunday after Thanksgiving. Organizers are recommending parade entries, including individuals, those traveling on floats and other groups, as well as spectators follow social distancing guidelines and wear facial coverings.

Tossing candy by parade participants will be optional at this year’s parade. Also, a modified version of “Hometown Christmas” is expected to be held in conjunction with the parade. Events, including live entertainment, will be taking place on the historic courthouse lawn. Those attending are asked to follow CDC guidelines. Events at the courthouse are expected to begin at 3 p.m. and will pause for the parade and continue after the parade.

After the parade, Santa will be visiting with children, either on his lap or by social distancing using a microphone, according to organizers. Also, the lighting of the community Christmas tree will take place after the parade. The parade will begin on Industrial Drive, traveling along Highway 25 and into downtown Carthage. Meanwhile, the annual Gordonsville “Night of Lights” Christmas parade will take place the following weekend. The parade is scheduled to take place beginning at 5 p.m., December 5. The parade begins at the intersection of Highway 53 and Main Street, following along Main Street and disperses on the east side of town.