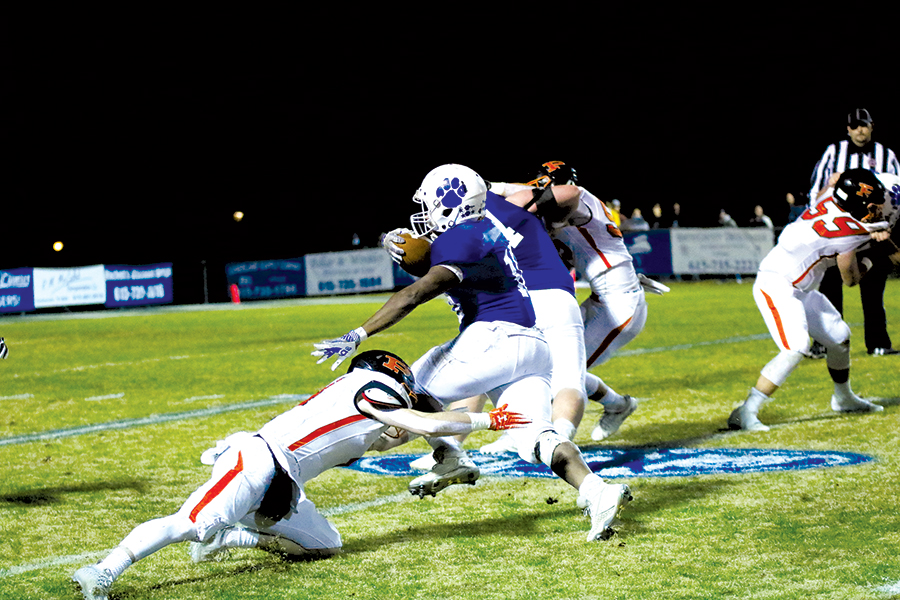 A rivalry that has become a staple in the high school football Class 1A playoffs added another chapter last Friday night at Turney Ford Field in Gordonsville. In their 16th playoff meeting dating back to 1986, the Gordonsville Tigers fell to the Associated Press No. 1 team in Class A the South Pittsburg Pirates, 37-7. Big Blue struck first with a 30 yard touchdown dash from senior running back Darrell Holt in the later stages of the first quarter and entered halftime with a manageable deficit at 14-7. However, the second half was all Pirates as they posted 23 unanswered points.

South Pittsburg entered the contest boasting two Class A Mr. Football Finalists in starting senior running back Hunter Frame and senior lineman Jared Stone. The Pirates massive 6-foot-4, 285 pound junior lineman Giovanni Davis has received attention from the Southeastern Conference with offers from Tennessee and Ole Miss. Frame and junior running back DeAndre Kelley did the most damage for the visitors’ offensive attack — combining for 389 yards and five touchdowns. Frame had 246 yards and two touchdowns while Kelley raced for 143 yards and three touchdowns.

South Pittsburg ran for 407 yards as a team. “When you are playing South Pitt, you know what kind of team they are going to have and they are a very talented team,” said Gordonsville head coach Scott Clemons. “I thought our football players played with a lot of effort last night. I thought we fought them. But, in the end they just got us in some plays and some situations that we could not handle.” The Tigers were able to move the ball at times as Holt ended the game near the century mark with 96 yards on 22 carries. Sophomore quarterback Matthew Albritton and senior wide receiver Wyatt Pemberton connected on five passes for 116 yards. Albritton went 6-of-14 in the contest for 120 yards.