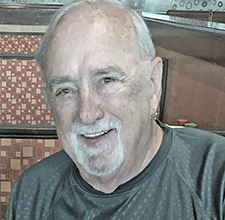 Mr. Williams was born October 12, 1941 in Sneads Ferry, NC, a son of the late Jonas Russell Williams, Sr. and Rosie Lee Boles Williams. He married Wanda Jane Burgess on March 29, 1963 and she preceded him in death on October 7, 2013 after 50 years of marriage. Mr. Williams was also preceded in death by Sister; Gwendolyn Swaim, Brother; J.R. Williams, Brother-in-Law; Eldon Burgess, and Sister-in-Law; Helen VanStander.

Mr. Williams worked at AVCO for 33 years as quality control supervisor until his retirement. He had a real love for motorcycles and was a longtime member of the BACA Club. He also was a sailboat captain, enjoyed the beach, travelling, and dancing. Sidney was a member of the Jaycees. He never met a stranger.

Funeral Services for Mr. Williams are scheduled to be conducted from the Gordonsville Chapel of Bass Funeral Homes on Saturday, March 6, 2021 at 1PM with lifelong family friend Debbie Goff providing the eulogy and Glenn Ramsey officiating. Interment will follow in the Brush Creek Cemetery.

Visitation with the Williams Family will be at the Gordonsville Chapel of Bass Funeral Homes on Friday from 3PM until 8PM and on Saturday after 10AM until service time at 1PM.

In lieu of flowers, the family requests memorials be made to the Lewy Body Dementia Association or the Parkinsons Foundation.