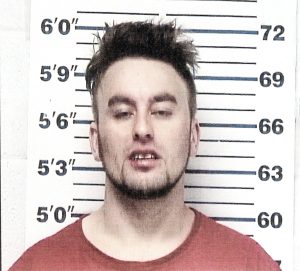 A man, who managed to elude law enforcement in Wilson County, wasn’t as fortunate when attempting to escape from Smith County Sheriff’s Department officers. With a sheriff’s department deputy in pursuit, the man struck a deer on Opossum Hollow Road and eventually wrecked his vehicle in the Grant community. In addition, the man attempted to evade police for a second time while being transported to the hospital in an ambulance, but was apprehended by a second sheriff’s department officer.

The bizarre incident began as Sheriff’s department Deputy Matt White was patrolling Alexandria Highway around 10 p.m., Monday night (March 1) when he observed a motorist traveling south on the state highway turn off their vehicle’s headlights. Deputy White attempted to stop the vehicle which began to flee along the state highway, all-the-while turning the vehicle’s headlights off and on.

The vehicle matched the description of a car which had earlier in the evening evaded law enforcement authorities in Wilson County. Officers in that county lost sight of the vehicle because the driver of the car had turned its headlights off. According to an offense report filed by Deputy White, the vehicle turned off Alexandria Highway onto Pigeon Roost Road, where, after about a mile down the county road, it struck a deer.

K-9 officer Sgt. Ridge Long arrived on the scene and placed the male subject in handcuffs. Jeffery Dale Barbee Jr., 25, Madison, was charged with two counts of evading arrest, driving under the influence and reckless endangerment.