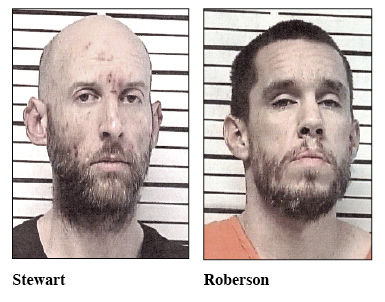 Thousands of dollars in methamphetamine and heroin are off the streets and two Cookeville men now face multiple drug-related charges. One of the two men claims to have purchased 14 ounces of methamphetamine in Nashville for $7,200 prior to being stopped by a Smith County Sheriff’s Department K-9 unit on Interstate 40 in Smith County. In addition, one of the two suspects was found in possession of a large amount of heroin. Also, one of the two men arrested told officers he was formerly convicted of second degree murder and was wanted on charges in Wilson County.

The investigation began when K-9 officer Sgt. Ridge Long stopped the vehicle in which the two were traveling at the 262 mile marker, east bound, for failure to maintain lane of travel. After walking up to the vehicle, the K-9 officer observed a set of digital scales in plain view inside the vehicle. One of the male subjects, identified as Gary Stewart Jr., age 39, was unable to provided identification. Also, Stewart, the driver of the vehicle, told the officer he was on probation.

During a search of Stewart, 14 grams of heroin were located in a jacket pocket, as well as $231 in cash, according to the officer’s offense report. Another occupant of the vehicle, identified as Brandon Wade Roberson, 35, was found in possession of less than a gram of heroin, according to the offense report. While questioning the suspects, K-9 officer Sgt. Junior Fields arrived on the scene to assist in the investigation. Fourteen ounces of methamphetamine was found along with a loaded Fredericksburg FNX-9 millimeter handgun, five Oxycodone pills, two subutex pills, two additional sets of digital scales, as well as several used syringes and clear baggies, according to the report.