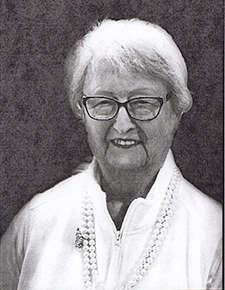 Longtime Carthage resident and pharmacist, Dr. June Empson Futrell, died at noon Thursday, March 18, 2021, at the Green Hills Rehabilitation and Healing Center where she was convalescing from an aggressive brain tumor.

A family memorial service is scheduled to be held to celebrate her life on Saturday afternoon, April 24th, at the Woodmont Hills Church of Christ with family members delivering the eulogy. She had requested her cremains be scattered in Tennessee.

Mrs. Futrell was a 1955 graduate of Ashland City High School and received her Doctor of Pharmacy Degree from North East State College in Monroe, Louisiana (now University of Louisiana Monroe).

While living in Carthage she was a faithful member of the Carthage Church of Christ and after relocating to Nashville she moved her membership to the Woodland Hills Church of Christ where she remained a loyal member until her death and had great pride in being associated with that congregation.

Mrs. Futrell loved being around animals and their companionship.

She loved the ocean and her happy place was the beach, as well as the Cracker Barrel.

This notice provided as a courtesy to the Futrell family.