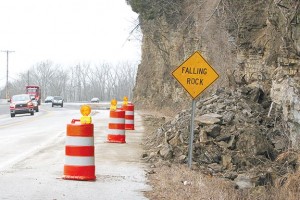 It will likely be sometime next year before a major Highway 25 reconstruction project located between Carthage and the Tanglewood community begins.

The project includes scaling back the bluff on the north side of Highway 25 at the Cumberland River overlook and stabilizing the embankment between the state highway and Cumberland River between Shoulders Motor Company and Hardees, two projects combined into one by the state transportation department.

Planning began to scale back the bluff after a massive rock slide spilled onto the highway in May 2013.

Prior to the bluff collapsing, transportation officials said individuals had contacted the department warning such a collapse might occur.

Signs were smaller collapses and rocks falling onto the roadway.

In addition to the bluff potentially collapsing again, the state highway’s south side embankment between Shoulders Motor Company and Hardees has been giving way to the Cumberland River since the May 2010 flood.