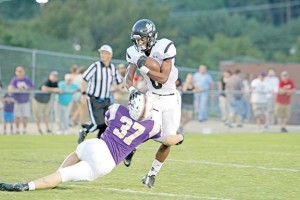 The Smith Co. High Owls football team went on the road for the first time last Friday night to face one of the top teams in Region 4-3A.

Host and region favorite Sequatchie Co. provided the road test and featured a bruising running attack which had piled up 88 points in their first two wins.

The Owls’ defense took advantage of three Indian fumbles to keep the game close, but in the end the rushing attack was too much and keyed a 19-14 Sequatchie Co. triumph.

Sequatchie Co. had 49 carries for 289 yards and all three scores as they featured three running backs that weighed at least 200 pounds.