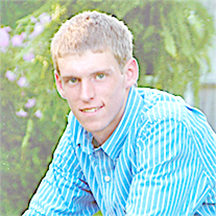 Funeral services for the 24 year old 2010 Cookeville High School graduate were conducted Saturday afternoon October 1st from the Life Church in Cookeville where he attended. Donnie Davidson and Greg Canada officiated at the 1 p.m. services and burial followed in the Crest Lawn Cemetery in Cookeville.

The family received friends on Friday evening at the Cookeville Chapel of Hooper-Huddleston and Horner Funeral Home in Cookeville.

Born October 29, 1991 in Cookeville he was the son and step-son of Lisa Minnear Carlile and Randy Carlile of Cookeville and the son of Vic Houston of Lebanon.

Grandparents preceding him in death were longtime Smith County Commissioner Herbert Fielding “H.F.” Houston who died April 14, 1014 at the age of 80, J. A. (Red) and Ella Mae Minnear and James P. Carlile.

While at Cookeville High he was a member of the basketball and golf teams and earned countless awards and honors in sports at local, regional and state levels.

Blake loved the out of doors, enjoyed hunting and fishing and had been a standout in athletics all of his life.

What set Blake apart from many young men of his age was his fighting spirit and can do attitude that was evident in every aspect of his life.

Faced with a debilitating illness in his final years, his faith always loomed larger that the battle before him.

Surviving in addition to his mother, step-father and father is a sister, Amanda Carlile Graham of Carthage, Illinois; two brothers, Logan Houston, Ryan Carlile and wife Carisa, all of Cookeville; grandmother, Kathryn Purnell “Kitty” Houston of the Rome Community and her daughter Kathryn Tayse and husband Kenny and another grandmother Arvilla Carlile of Cookeville; niece, Emma Dean Carlile.

This notice provided as a courtesy to the Carlile and Houston families.