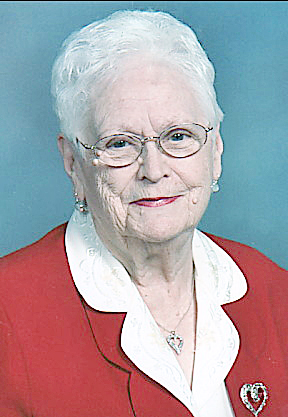 Funeral services were conducted Saturday afternoon October 15th from the Carthage Chapel of Sanderson Funeral Home with her pastor, Bro. Gary Bourgeois officiating. Burial following the 1 p.m. services was beside the father of her daughters in Ridgewood Cemetery.

On December 25, 1935 the former Miss Boze was united in marriage to Charles Weldon (Groundhog) Baker who died at the age of 45 on December 27, 1956. Mr. Baker was a member of the Carthage Police Department and was assigned to the night shift and succumbed to a heart attack shortly after his shift ended.

She was preceded in death by a daughter, Jacqueline Sue Baker Haltom who died November 15, 2005 at the age of 68.

Almost nineteen years after the death of Mr. Baker, she was married to Fayetteville, Tennessee native James Fred Edmonds on August 30, 1975. He preceded her in death on September 28, 1977 after just over two years of marriage.

During World War II Mrs. Baker-Edmonds worked at an aircraft factory in Detroit, Michigan and following the war was employed at the J. L Hudson Aviation Co. in Baltimore, Maryland as an electronics inspector.

After returning to Tennessee she was employed at the W. T. Grant Co. in Nashville.

She attended Gordonsville High School and was a member of the Temple Baptist Church in Old Hickory.