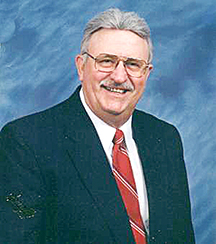 Former Macon County Commissioner and Willette Community businessman, Mr. Huey Smith of the Russell Hill Community in Macon County died Saturday morning October 15, 2016 at 5:20 a.m. at the age of 83 at the Palace in Red Boiling Springs.

Funeral services were conducted by his longtime minister Jack Honeycutt on Monday afternoon October 17th from the Anderson and Son Funeral Home in Red Boiling Springs. Burial followed the 2 p.m. services in the Davis Cemetery at Russell Hill.

A daughter-in-law, Donna Wilson Smith also preceded him in death.

On January 31, 1958 he was united in marriage to Russell Hill Community native, the former Barbara Brockette.

In 1978 he was elected to the office of Macon County Commissioner representing the Russell Hill Community district and while serving as a commissioner was on the road, ambulance and mental health center committees.

For twenty one years he was co-owner and operator with Paul Jones of the Smith and Jones Pallet and Lumber Company in Willette.

He was also the lead singer for the Inspiration Quartet and they sang at many weddings and funerals.

This notice provided as a courtesy to the Smith Family.