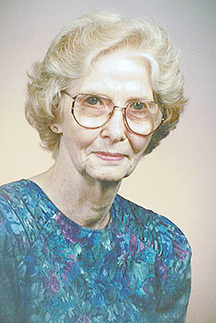 Mrs. Griffin was born August 31, 1923 in Phoenix City, AL, the daughter of the late Walter Ornald Moore and Pearl Howard. She married Robert Lawrence Griffin, Sr. on September 23, 1939 and he preceded her in death on June 6, 2010. Mrs. Griffin was also preceded in death by Brothers; Jack Moore and Earl Moore and Sister; Louise Smith. She attended the Church of Christ and lived in Rome, GA, all of her life before moving to Tennessee in 2010.

Graveside services and Interment for Mrs. Griffin are scheduled to be conducted from Floyd Memory Gardens in Rome, GA, on Tuesday, November 1, 2016 at 1PM, EST, with Matthew Wallin officiating.

Visitation with the Griffin family will be just prior to the graveside services on Tuesday.