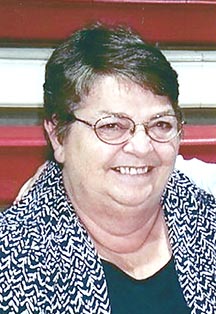 Mrs. Barbara Roark, of the Lock Seven Community died at the age of 66 of cancer at 5:38 p.m. Monday afternoon March 13, 2017 at the St. Thomas West Hospital in Nashville.

Eld. Floyd Wayne Ferguson officiated at the 11 a.m. Thursday morning March 16th funeral services from the Carthage Chapel of Sanderson Funeral Home. Burial was beside her husband in the Garden of Everlasting Life at Smith County Memorial Gardens.

She was born Barbara Lou Curtis in Glasgow in Barren County, Kentucky on May 29, 1950 and was one of seven children of the late Elzie and Saretha Howard Curtis.

Mrs. Roark was preceded in death by two sisters, Jean Tate and Elizabeth Curtis; a brother, John Leo Curtis and by a brother-in-law Jimmy Neal Roark.

On September 20, 1974 at the Westmoreland United Methodist Church she was united in marriage to Macon County native Hugh Wayne Roark. He preceded her in death on March 11, 2015 at the age of 72, following almost forty one years of marriage.

Mr. and Mrs. Roark were preceded in death by a granddaughter, Samantha Jade Lambert.

Mrs. Roark was saved at the age of 12 at the Beautiful Home Missionary Baptist Church in Monroe County, Kentucky and was baptized into the full fellowship of the church by Eld. Floyd Ferguson.

She was a 1968 graduate of Tompkinsville High School.

The Roark family requests memorials to the American Cancer Society.