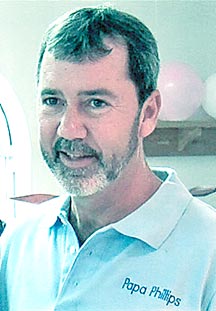 Memorial services are scheduled to be conducted at 1:00 p.m. on Saturday afternoon December 16th from the Gladeville United Methodist Church, his close friend Lyndon LaFevers will deliver the eulogy.

The Phillips family will receive friends following the memorial services.

Mr. Phillips was cremated at Cumberland Family Services in Algood.

The Ashland City native was born Robert Wayne Phillips in Nashville on November 29, 1961 and was the son of Mrs. Sue Burton Phillips Putman of Nashville and the late Donald Haynie Phillips Sr.

On June 15, 1982 he was inducted in Nashville into the United States Navy and served our country until being honorably discharged as a Senior Officer on January 16, 1986. His total sea service was four years, four months and fourteen days.

He was a teacher and basketball coach at the Forks River Elementary School until becoming disabled from a fall in 2009.

Mr. Phillips is a member of the Gladeville United Methodist Church where he was a former youth leader.